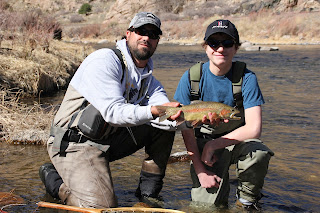 It has been quite a while since I updated any posts. The last two months has been extremely busy with the move of Royal Gorge Anglers to it's new location on Highway 50 West at Skyline Drive, and it has not left time for much else. I hope you have all seen the new location, or at least plan to soon.
Fishing on the Arkansas is really firing up, we have enjoyed several weeks of incredible blue winged olive action, although due to the warm bright sunny days most of this action has been sub-surface on nymphs and emergers. The unseasonably warm March has brought on the caddis hatch about three weeks earlier than usual. Today I fished the Canon City River Walk and encountered a large caddis hatch, I took a good number of fish on the top with a standard elk hair caddis, but about 90% of the fish were caught on the bubble pupa I was trailing behind the adult. Most people that set out to fish the Arkansas grab a hand-full of elk hair caddis and think they have it covered, ten years ago this was true, now it is all about the pupa.

The picture is of 14 year old Roman Fedorak on his very first fly fishing trip with his very first fish on a fly rod, the 16 inch rainbow would be a great fish anywhere, but off the Arkansas, it is a real treat. This is the perfect example of why I love to guide, not for the "big money", not for the wind knots and hooks in the ear, not for the occasional ass hole that counts every fish and has a tally of what constitutes a good day. I love to create memories... It's amazing that one fish can mean so much, but this fish will never be forgotten by Roman, his proud father or me.
Posted by Clint Werthman at 7:24 PM 3 comments:

The Fly Fishing Film Tour returns to Colorado Springs on February 17th at the Stargazers Theater, doors open at 6:30 pm and the film will start at 7:00 pm.
The popularity of the film tour has blown up in the past couple of years, and most venues are standing room only. You can pre-purchase your tickets at Royal Gorge Anglers and most local fly shops to ensure you are not left standing in the cold. This years show features "fish porn" from around the world, both fresh and salty and as always it's a guaranteed good time.
Posted by Clint Werthman at 10:02 AM 2 comments:

Christmas At The Shop

I hope everyone can join us at Royal Gorge Anglers on December 17th for an awesome Christmas Bash, there will be a little something for everyone. From 1pm to 4pm we will have fly tying demos by some of the best tiers in the industry, great presentations, awesome food and so much more... Landon Mayer will be the special guest, so come pick up your copy of his new book Colorado's Best Fly Fishing and have it signed by the man himself.
It is the perfect time to finish some Christmas shopping for all the fly fishing addicts on your list, eat some killer chow and meet some of the leaders in the industry..... Hope to see you all there!
Posted by Clint Werthman at 5:33 PM No comments: 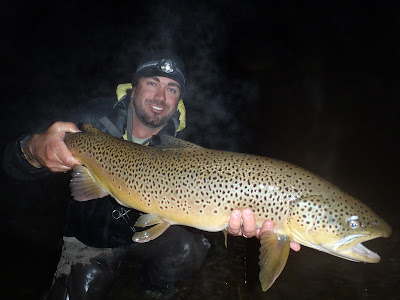 Pure evidence of why Fall is my favorite season to be scouring the country with a fly rod in my hand.. I had an epic evening with some of my closest friends, a few of my favorite beers and to top it off, I had the pleasure of meeting this beautiful 32" 13 lb. hen.. Fishing was incredible for all, and fish were measured in pounds rather than inches. I want to thank Taylor, Joe and Shea for help on the net, their photography skills and the good company as always..
Posted by Clint Werthman at 12:42 PM 3 comments: 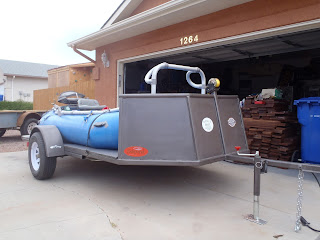 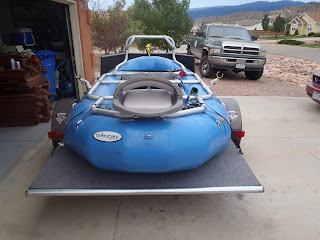 Well It's done, just finished my self-built, self-designed custom raft trailer (aka.The San Juan Sled). Built mostly from parts on hand and a few materials begged off of job sites, it is equipped with full frontal rock guards, a strap winch and a roller bar on the rear. Expect to see this rig moving at a high rate of speed towards some of the best floatable rivers for quite some time.. I already have another trailer in the works for my Irish compadre, I think I might have to turn this in to a business... Need a custom trailer?
Posted by Clint Werthman at 5:43 PM No comments: 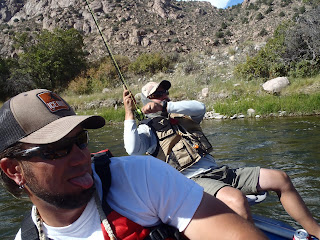 I finally stepped up and bought myself a Aire raft with a Salida Riverboat Works frame. I have spent every spare minute navigating the low flowing Arkansas River working on my technical rowing skills, and hoping to get enough miles logged to be able to take my clients out by spring.. Fishing has been great subsurface and all of my friends have been lacing fish right and left as I row them down the river, I think it's time for my friends to learn how to row!!
Posted by Clint Werthman at 7:57 PM 1 comment: 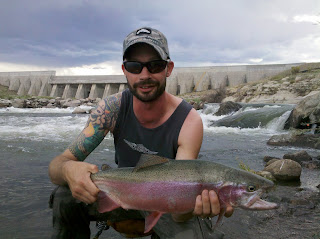 Long time friend and fellow guide Brett Penvose shows off some color..... and the hog rainbow has great color too. Brett took this 26" fatty bow on the Arkansas River tail water below the Pueblo dam on a #16 Red Thunder on Aug 31st.
Brett has been one of my fishing buddies for many years and I have watched him dedicate him-self to being one of the best on the Arkansas River and every other water shed he fishes. I am happy to say Brett joined up with us on the SoCo crew guiding for Royal Gorge Anglers, so if you are interested in booking a guided trip on the Pueblo tail water, South Platte or upper Arkansas, contact the fly fishing experts at  www.royalgorgeanglers.com

Posted by Clint Werthman at 11:54 AM No comments:

Clint Werthman
Clint is the head guide for SoCo Guides / Royal Gorge Anglers in Canon City. He has over 25 years of experience fly fishing and has guided in Alaska and Colorado for the past 10.